On December 20, 2017, Congress passed “An Act to provide for reconciliation pursuant to titles III and V of the concurrent resolution on the budget for fiscal year 2018”. The original, much shorter name, was the “Tax Cuts and Jobs Act”, but it had to be disregarded late in the process in order to not violate the Senate’s Byrd Rule. President Trump signed the bill into law on Friday, December 22, 2017.

Many of the provisions in the law take effect on January 1, 2018, and will expire on December 31, 2025. One of the biggest changes is in individual tax rates. Tax brackets for single and married taxpayers filing joint returns are shown below: 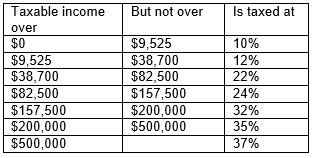 Mortgage interest can be taken as an itemized deduction with a few changes. The deduction for mortgage interest is limited to underlying indebtedness of up to $750,000 ($375,000 for married taxpayers filing separately). The previous limitation was $1 million of indebtedness. This new limitation is applied to loans after December 15, 2017. There are some transition rules for contracts entered into between December 15, 2017 and April 1, 2018. In addition, taxpayers are no longer allowed to take a deduction for interest on a home equity loan.

The deduction for certain miscellaneous itemized deductions, if they exceed 2%, of the taxpayer’s adjusted gross income has also been suspended. This includes the deduction for tax return preparation fees.

Beginning with the 2019 tax year, alimony will no longer be a deduction for the payor nor will it be considered as income to the recipient. This would apply to any divorce or separation agreement executed after December 31, 2018.

Beginning with calendar 2018, the child tax credit increases from $1,000 to $2,000 per child. In addition, the credit will be reduced for income over $400,000 for married taxpayers filing jointly. The phase out threshold will not be indexed for information. An additional $500 credit may be provided for other qualifying dependents. In order to claim the child tax credit on an income tax return, the child must have a Social Security Number and is issued prior to the due of the income tax return.

The new tax law expands the rules under Section 529. Under the pre-Act law, educational funds under Section 529 could only be used for post-secondary education (e.g. college). Under the new tax rules, starting with 2018, you would be able to take federal-income-tax-free withdrawals of up to $10,000 a year to cover tuition at a public, private, or religious elementary or secondary school.

In prior years, moving expenses incurred, after meeting qualifying tests, could either be deducted from a taxpayer’s income tax return or if reimbursed by the employer, excluded entirely. For tax years beginning after December 31, 2017, the deduction/exclusion is suspended except for military moves.

In prior drafts of the bill, the exclusion on the sale of home was changed to increase the ownership and use time limits. Fortunately, this was removed from the final bill. Thus, the existing law remains which means a taxpayer can potentially exclude from federal taxation up to $500,000 (married filer) of gain from a qualified home sale.

As you can see, the recently enacted tax bill will have broad ranging changes and implications. We expect additional details to be forth coming and encourage you to reach out to your tax professional with any questions or concerns.

The information provided above is for general guidance only and should not be utilized in lieu of obtaining professional tax and/or legal advice.

Simplify your mobility tax program and stay one step ahead. Always. Schedule your call today.